Aromatic, creamy, and spiced, this easy flan bread pudding recipe combined with a rum sauce, raisins, and dry fruits is a thing of dreams, and a dessert your guests will remember for a long, long time. But if you don't want rum, fear not, substitutions are suggested for those who wish to abstain.

Why I ❤️ it • Recipe • Ingredients • Preparation 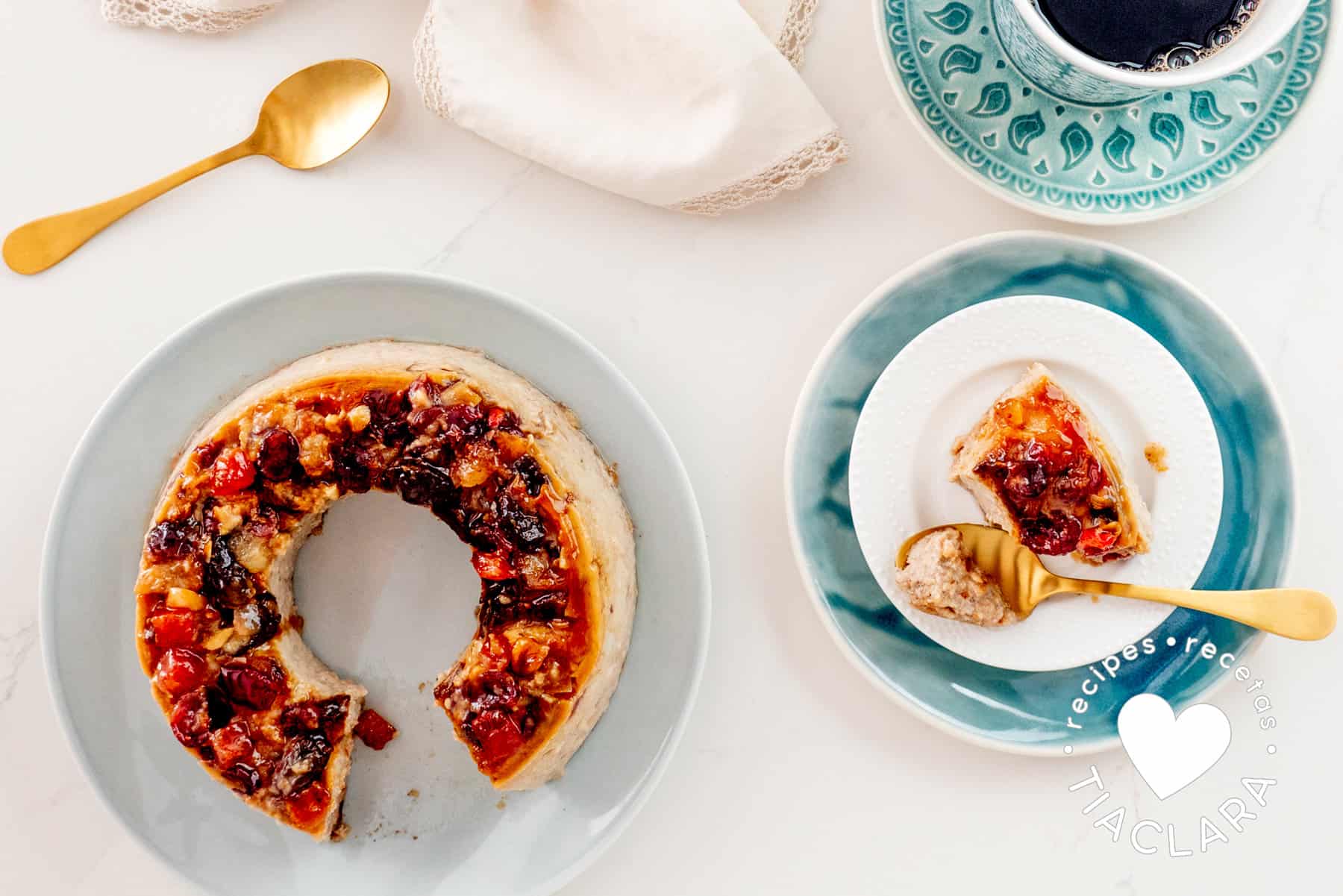 This is the best bread pudding recipe you'll find anywhere, at least in my humble opinion. It's what happened if a flan and a fruitcake had a child. The bread pudding is baked in a water bath, in a caramel-covered pan, with dry fruits steeped in rum. Once cooked and flipped (as a flan), the caramel turns into a rum sauce that is to die for.

The result is a custardy flan bread pudding, with bits of rum-flavored fruits and raisins. So amazing, so grown-up.

This awesome free recipe contains Amazon affiliate links, I receive a small commission from any purchase you make at no extra cost to you. Thanks!

Before starting, please make sure you have all the ingredients and utensils ready.

Mix raisins, sultanas, dry fruits, and rum, let it sit overnight in the refrigerator (or 8 hours).

When it's time to make the pudding, separate the fruit from the rum, discard the rum, and set fruits aside to use later in the preparation.

Crack the eggs into a bowl. Add condensed milk and cinnamon powder, and whisk until it is well mixed. Stir in the melted butter.

Add the bread and stir until the bread has soaked the liquids. Cover and let it rest in the refrigerator for an hour. At the 30 minute count, preheat the oven to 300 ºF [150ºC], in the meantime, prepare the baking mold as described below.

We're going to coat the inside of the baking mold with hard caramel. To make the caramel, mix 2 tablespoons of water and sugar in a small saucepan. Heat over medium-high heat until it turns a dark golden color. If it starts getting darker in some spots and not others, stir to cook it evenly. Don't let it burn.

Remove from the heat and immediately pour the caramel into the baking pan. Make sure to use a holder to grab the pan, as it will be very hot. Coat the pan with the caramel, working quickly before the caramel sets. You can coat it better by using a silicon spatula.

Once the caramel has hardened (about 10 minutes), cover the bottom of the pan with an even layer of the fruit mix.

Spoon the pudding mixture into the baking pan, making sure not to disturb the caramel or fruits.

Cover the pan very tightly with aluminum foil to prevent water from getting in in the next step.

To bake in a bain-marie (hot water bath), place the baking mold into a deep baking tray, and fill the baking tray with boiling-hot water.

Carefully place both into the preheated oven, and bake for an hour.

Remove from the oven and let it cool to room temperature. Once cooled, separate the edge from the pan with a toothpick. Place it on a serving plate and flip. You may need to tap it or shake it a bit to loosen it. Serve at room temperature.

This luscious bread pudding is perfect to serve with your after-meal coffee or dessert.

How do you make sweet bread pudding?

Sweet bread pudding is made by soaking day-old bread in milk, adding eggs and spices, then baking.

How do you make bread pudding moist?

What can you do with bread ends?

Bread ends and the crust can be used to make bread pudding, so if you have enough for this recipe, by any means, use the ends and crust. You can also make breadcrumbs for tasty Dominican meatballs.

This is just a printer-friendly summary, some useful details are found in the recipe above.

This site uses Akismet to reduce spam. Learn how your comment data is processed.

Hi, I'm Tía Clara! I have been a recipe developer, and recipe writer for 20 years, and here I share easy recipes you'll love.